Urgent action is needed to curb climate change and mitigate the dangerous consequences of air pollution.

Quantitative health impact analyses are powerful tools that cities can use to advance the climate agenda, providing the evidence cities need to accelerate climate action and capture the associated benefits. 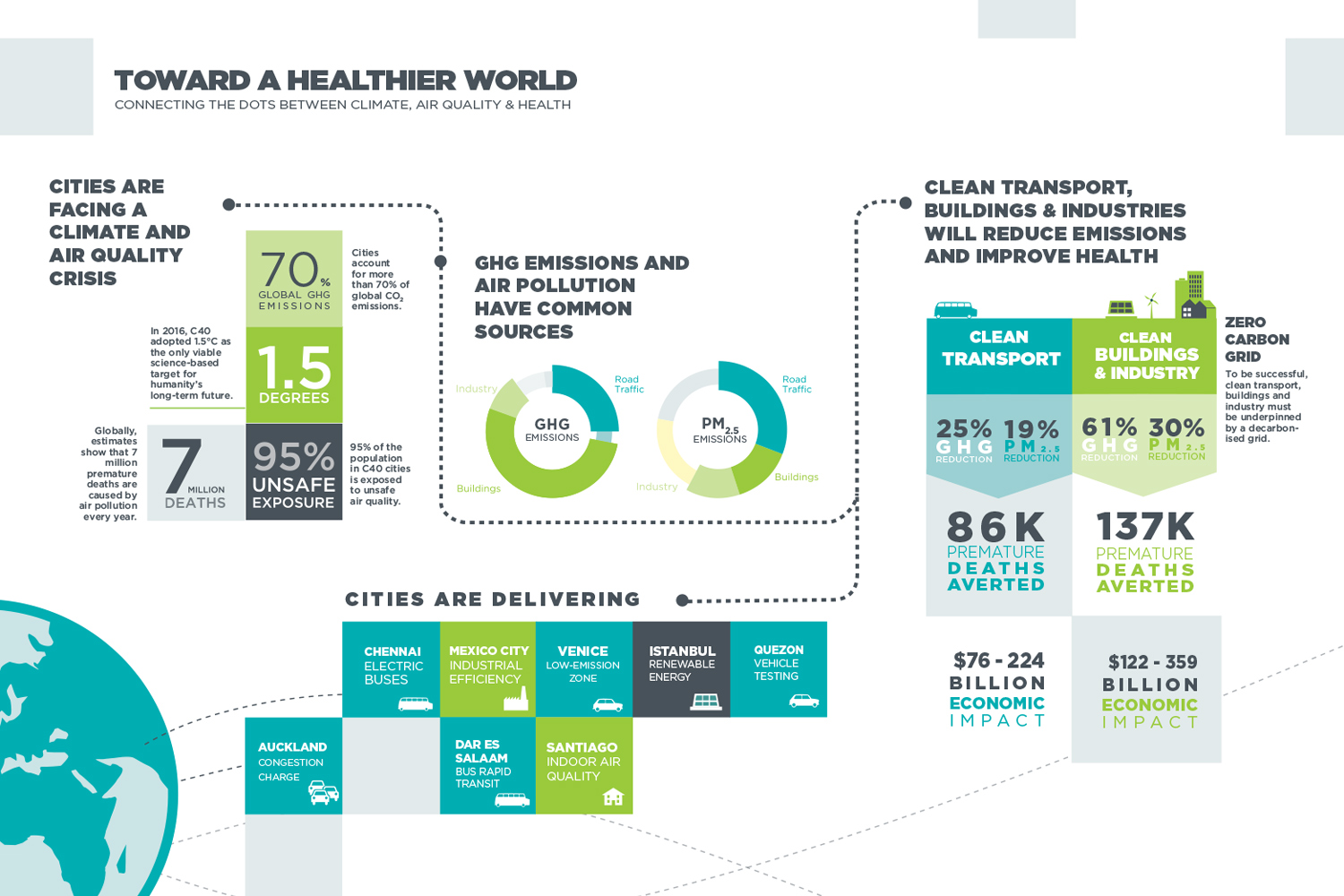 Cities have a leading role to play in preventing a climate crisis. Although urban areas only occupy 2% of the world’s land, their carbon footprint is enormous. Cities consume over 2/3 of the world’s energy and account for more than 70% of global CO2 emissions. Cities are also extremely vulnerable to the impacts of climate change, and they are increasingly exposed to climate hazards such as longer and more frequent periods of extreme heat, as well as flooding due to heavy rainfall, rising sea levels and powerful coastal storms.

At the same time, cities are facing significant air pollution problems. Pollutants such as PM2.5 and NO2 represent a major risk to people’s health, particularly children and the elderly, and an estimated 95%  of the populations in C40 cities are exposed to air pollution levels that exceed the World Health Organization’s (WHO) recommendations. WHO estimates that air pollution causes 25% of all adult deaths from heart disease, 24% from stroke, 43% from chronic obstructive pulmonary disease and 29% from lung cancer.

The climate challenge and the air pollution problem are linked, and many actions that tackle greenhouse gas (GHG) emissions will also reduce air pollution. Recent research from C40 and BuroHappold has shown that if all C40 cities achieved clean transport, buildings and industry, underpinned by a decarbonised grid, PM2.5 levels in these cities would drop by 49%while reducing GHG emissions by 87%, on average. The air quality improvement would result in massive health benefits for citizens, and potentially avert a total of 223,000 premature deaths per year across all C40 cities.

The air quality improvement would result in massive health benefits for citizens, and potentially avert a total of 223,000 premature deaths per year across all C40 cities.

This report shows cities how they can use the compelling evidence to connect the dots between climate, air quality and health, and make a much stronger case for action. The report introduces a practical toolkit and methodology that allows cities to quantify the multiple benefits of taking climate actions in their cities, including the extent to which climate actions reduce air pollution, improve health and provide wider economic benefits.

Twenty-five participating C40 cities have trialled the methodology and proposed ambitious measures for the transport, buildings and energy sectors that tackle both air pollution and GHG emissions. Analysis reveals that these climate actions could effectively reduce GHG emissions by 3.5MtCO2e, while bringing about a sizeable improvement in air quality for 77 million citizens across the 25 cities. It is estimated that carrying out these actions would reduce PM2.5 non-background concentrations by 5.9%, and reduce NOX levels by 16.7%, on average. The delivery of the proposed actions could also prevent 2,655 annual premature deaths due to air pollution, translating into 31,135 life-years gained across all 25 cities. The decrease in air pollution would positively impact the health of cities, and the number of annual hospital admissions would decrease by 9,275. 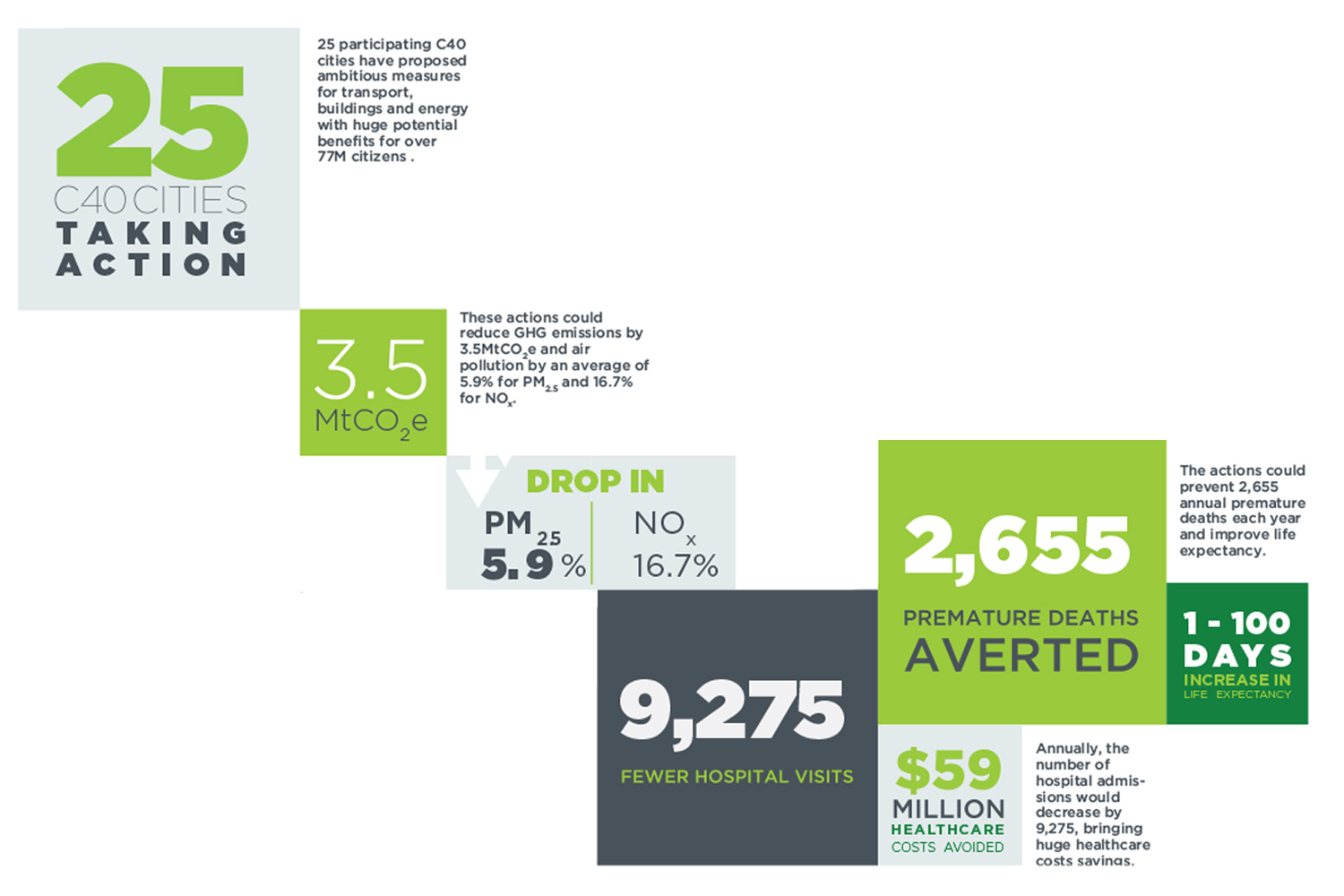 It has also been estimated that the 25 cities’ proposed climate actions would generate a total economic value of $1 billion per year. The overall value of reducing hospital admissions linked to air pollution has been estimated at $59 million.

Proposed climate actions would generate a total economic value of $1 billion per year.

These gains are possible from just one single, high-impact action in each city, and show the enormous potential benefits if action were taken on an even greater scale. Los Angeles was a participating city additional to the 25 core cities, showing the benefits accrued from a bold, city-wide programme of action. Los Angeles has committed to ambitious action to tackle climate change and air quality across transport, buildings and industry, resulting in 26.1MtCO2e savings as well as avoiding over 1,650 annual premature deaths and 660 hospital admissions, saving an estimated $15.6 million in healthcare costs.

Urgent action is needed to curb climate change and mitigate the dangerous impacts of air pollution. This will require ambitious and transformative actions from cities, and the opportunities to public health and the economy are huge. This report shows that these goals can and should be reached simultaneously to create healthy, thriving cities. 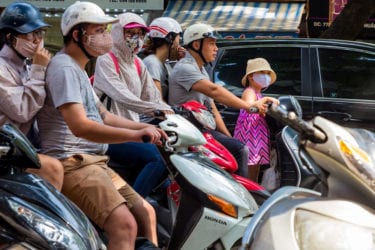 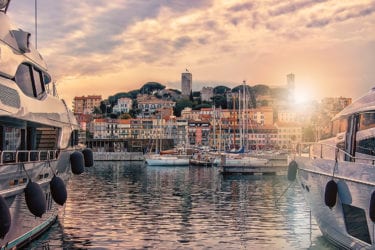 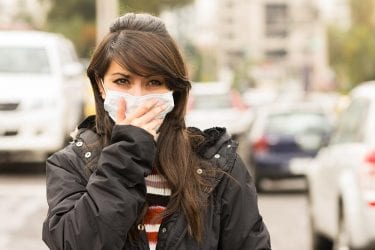