We have not hosted Green Sky Thinking before so it was always going to be an interesting week. The backdrop to the Green Sky Thinking week this year was the challenge of population growth in London which is set to increase by nearly 40% by 2030 and will place great stress on existing transport, housing and energy supply systems.

As many of you will know, our city is considered to be one of the best places to live in the world, attracting record levels of investment from around the globe. The population of London is now greater than at any point in history and is set to grow by another 2m in the next 20 years. The challenge is to manage this growth while maintaining the quality of life we have come to expect. In order to meet this challenge all of the infrastructure in the city – housing, energy, transport, education will need to do more. This will require joined up thinking and the London Infrastructure Plan is a big step in the right direction in developing an integrated and coherent strategy. Ed Lister of the GLA touched on many of these themes when he gave his keynote address at City Hall at the Green Sky Thinking Launch event.

We kicked off the week with our own Buro Happold hosted event on the Monday evening which we billed as “Engineering the future”. The format of our evening was an exhibition which brought together a number of talented young designers from across our practice in one space to give a series of interactive presentations followed by opportunities to debate with the presenters and vote for the innovation which will have the biggest impact on our city. The challenge to us as engineers is to harness innovations in digital technology to develop solutions which are sustainable and resilient, and above all – integrated. Digital technologies and open systems of big data have the potential to allow us to plan, design and operate our city and the buildings within it to the benefit of all citizens. We saw the event as a good opportunity to showcase the talent and ingenuity we have across the business and how we are applying ourselves to some of the key challenges in London at the moment at the strategic, city and building levels. I was particularly pleased to see the way our young engineers took up the challenge of presenting their key ideas in a series of three minute presentations which featured everything from how we can use big data and social media to make the case for more green space in our city through to creating a digital model to understand the interaction of key parameters on the building envelope and everything in between. I was particularly impressed by the work on big data and how we have the opportunity to put people at the centre of the design process and better understand how they engage with the infrastructure of the city and what they need from their buildings. This is a very powerful idea.

Of course technology is part of the solution but this needs to be harnessed to integrated thinking. We are rightly proud of the integrated thinking that we have brought to several major projects in London. The most recent example of this of course is the London 2012 Olympics in which we played a major role in master planning and designing the venues – including the main stadium and the media centre. Much of the land was post-industrial and blighted with contamination, infrastructure was weak and was not likely to attract investment any time soon. The event itself was a huge success but more importantly the legacy created a huge new transport interchange at Stratford (opening up east London), has provided hundreds of new homes, delivered coherent utility and energy strategy for the area which will enable further development. Arguably the greatest legacy is not hard infrastructure at all but the Olympic park which adds to London’s green infrastructure. The health and wellbeing benefits of green spaces in cities are well understood but the environmental benefits of improving quality and providing flood protection is starting to be valued.

I feel that major infrastructure interventions like this are part of the solution but they are very capital intensive and cause long lasting disruption. We have to find smarter ways of using the existing infrastructure to compliment these mega projects. By embedding digital intelligence in the infrastructure systems it is now possible to map and control people, energy and water flows and manage the peaks better. This has been happening in buildings for a long time – destination control systems have been managing peak up-flows in lifts in tall buildings for over 20 years and we have had lighting control systems even longer. Maybe the slow uptake in these ideas at city level is not unrelated to the fragmentation of the ownership of utilities makes innovation velocity very low.

I am convinced that open source Big Data and wearable technology have the potential to put people at the centre of the design process. By better understanding how people engage with infrastructure and how buildings promote health and well-being we can build evidence to support our design ideas and increase return on investment.

The evening ended with people voting for the innovation they believed would have most impact and we managed to get a good discussion going between the various groups of people on the merits and application of each idea. The feedback from those that attended has been very positive. It was an opportunity to stand toe to toe with our peers and contribute to the thinking around some of the biggest challenges facing our city. I think the event has raised the profile of Buro Happold in this space, cemented some of our most important client relationships and hopefully inspired our young people to aim even higher next year.

The event that we co-hosted with University College London focussed on the remaking of the UCL estates in a low carbon way. Many of the existing buildings on the Bloomsbury campus are typical across the UK. As we know up to 80% of our current building stock will be with us in 50 years’ time. The London plan calls for an 80% cut in carbon emissions in London by 2050. In order to hit this target we need to find ways of decarbonising our existing building stock by carrying out systematic deep refurbishment of the existing building stock. We demonstrated on the Wates building how you can strip back the building to its frame, strip out the existing services and make necessary structural interventions to remake a building. In so doing we will reduce carbon emissions on current performance by 100%. Building on this project and the work we have carried out on the recently renamed ‘Attenborough Building’ in Cambridge, we are evolving a blue print for refurbishment which repurposes existing buildings while decarbonising their operation. We believe that energy efficiency in existing buildings is so pivotal to delivering on carbon targets that it should become a national infrastructure priority. 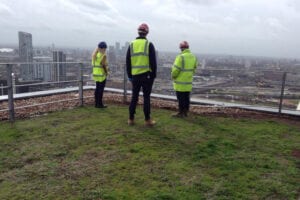 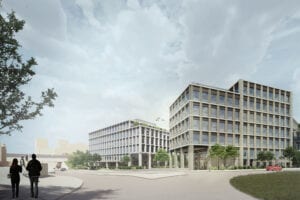 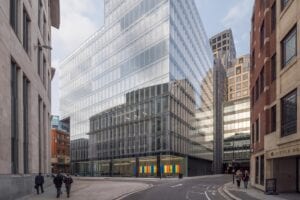 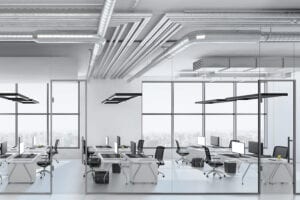 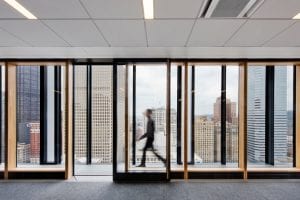 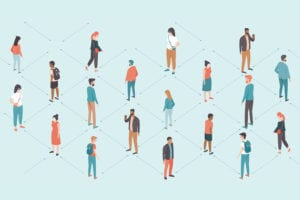