Structural excellence behind One Angel Square

One Angel Square was designed to a demanding target of BREEAM Outstanding and supporting the environmental strategy was a commitment to ensure the structure was truly carbon efficient. The solution was to develop a structure that was benchmarked in embodied carbon and developed to minimise material through rigorous design analysis. In addition, the solution to maximise off site manufacturing reduced packaging waste, with 80% of overall site waste avoiding landfill. The earth tubes, developed as part of the passive energy strategy, bring in 50,000 litres of air per second and contribute to a carbon saving of over 2,300 tonnes.

The design for the building was developed through Building Information Modelling (BIM). From the early concept design stage, layout and details were developed with the architect using a range of modelling software. The modelling was advanced to detailed design and tender stage to ensure the building was fully coordinated and that tolerances and construction sequences were tightly managed.

The bespoke solution to use long-span steelwork and exposed precast concrete coffers meant that construction methodology and package interface was critical. By adopting off-site manufacturing, we were able to prototype the construction of the building using a common BIM model between frame, precast and facade contractors. In addition, physical prototype mock-ups were built for the frame and facade to test construction sequencing, interfaces, tolerances and deflections. As a result, the on-site works were delivered two weeks ahead of programme.

As part of research for the Technology Strategy Board, the drainage strategy has been tested against climate change. The building uses grey water recycling estimated at 95% re-use and rainwater harvesting at 65% re-use. In climate change modelling, the building was tested to 2050, with a predicated 30% increase in rainwater and corresponding increase in sudden downfall. By utilising the designed rainwater strategy, the building is able to protect against flooding under these extreme conditions.

The building has been designed to reflect the clients sustainability ethos and operating needs but also to be commercially viable and market leading. The large floor plates are column free and achieve a net to gross ratio of 80-85%. The structural grid peaks at 16.5m clear span and is carefully aligned to a 3.0m planning grid with a 7.5m column grid to assist car parking in the basement.

The atrium roof and double facade were designed by our structural and facade teams. The roof was optimised using modelling programming to standardise the detailing and to ensure we achieved high daylight penetration and clear views out across the Manchester cityscape.

By adopting a triple core arrangement and destination control lift management, slip formed for speed of construction, the building can be sub-divided into six tenancies on each floor plate.

The design was developed to deliver cost efficiencies through standardisation. 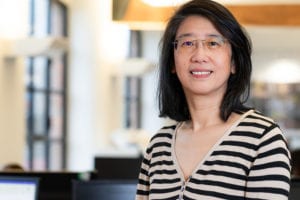 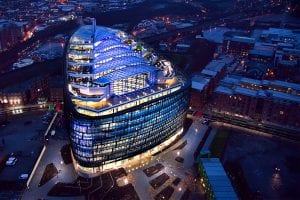 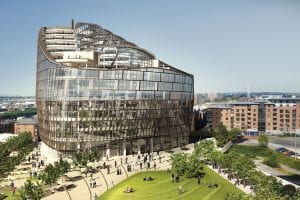