The next generation of stadium and the role of the facade in creating identity, atmosphere and performance.

Stadia are some of the most complex specialist buildings – they serve an increasingly important function in local communities – not to mention the passion and love that sports fans have for them as iconic representations of the teams they support.

This article originally featured in the Autumn 2019 issue of Intelligent Glass Solutions. You can view the full publication here. 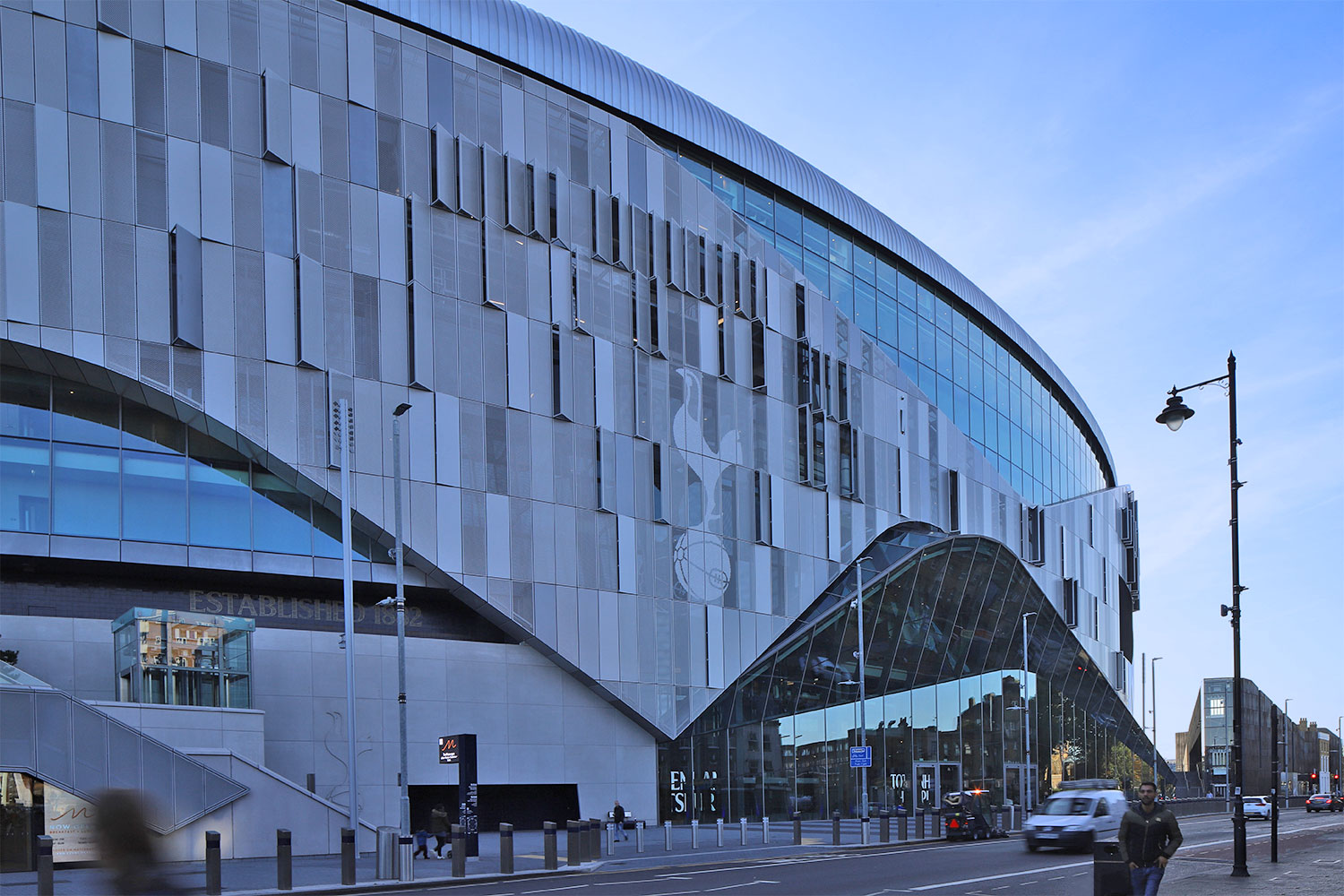 The Evolution of Stadium Design

Stadium design is evolving – these buildings are moving away from the once a week usage of times gone by. Now they are focal points within the community for regeneration and development. Once a powerhouse of structural engineering that were largely environmentally uncontrolled, these buildings are now advancing to create high performance spaces to suit a variety of needs. Be it a state of the art media centre, a VIP viewing room,  restaurant or at the heart of it, creating an unforgettable experience for the fans with an exciting atmosphere that lingers long after the game has finished.

The combination of architecture and engineering is the science of buildings. At BuroHappold we are applying our specialist engineering knowledge to better understand what buildings need in order to be successful. With Stadium, we feel it is really about venue performance. We are harnessing powerful data to assess and analyse performance and behaviour to really understand what good looks and feels like. One particular area of pioneering research we have been undertaking
is how to measure atmosphere. A great atmosphere leads to a better fan experience, which in turn translates to increased profitability for the client. Therefore really understanding the metrics and contributing factors, in relation to the stadium building itself, helps us to engineer the optimal solution.

The new Tottenham Hotspur Stadium provides state of the art facilities and increases spectator capacity from around 36,000 to 62,000. The stadium has a pioneering retractable pitch design that ensures it is a highly flexible sports and entertainment venue. The stadium itself will not just be a venue for football matches but will include NFL games, music concerts, and private events such as conferences and banquets. 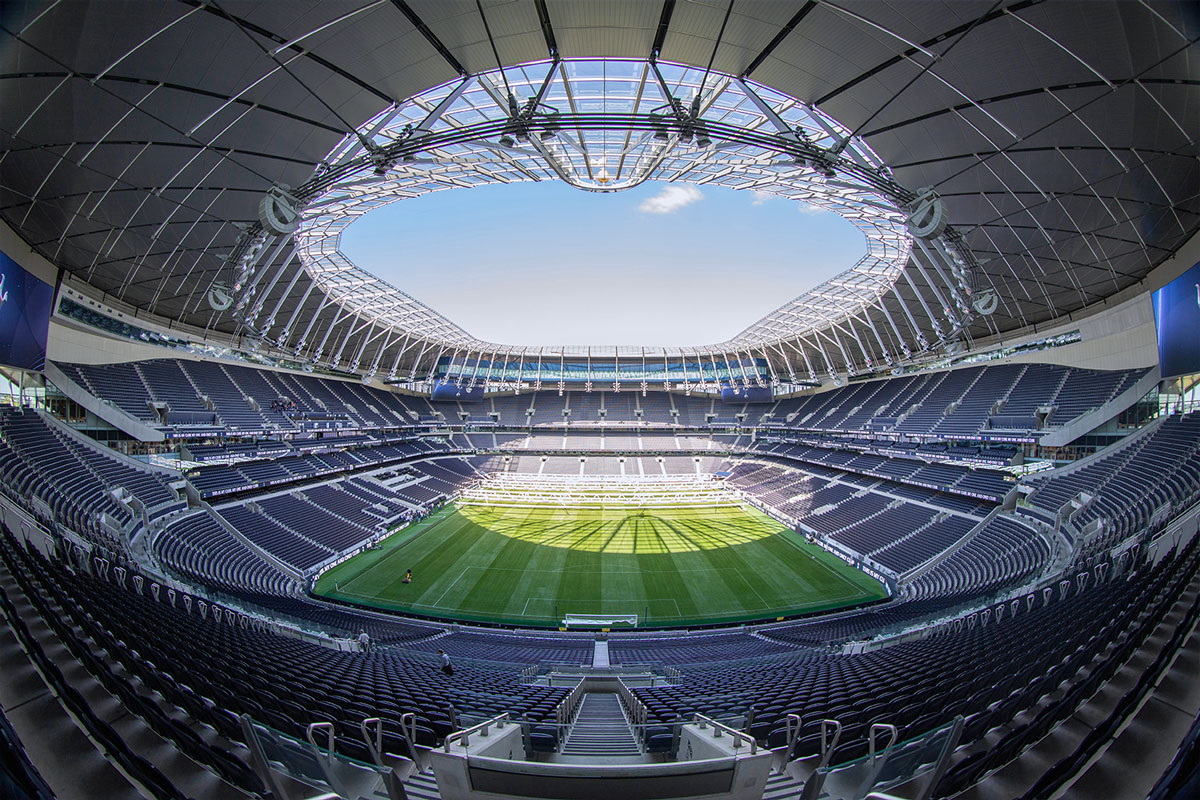 From the outset the client’s aspirations was that the new stadium should offer fans a better experience with both an unforgettable atmosphere and an intimate friendly vibe. The stadium itself and the wider development around Northumberland Park is focused on providing a catalyst for regeneration across the local area ensuring that the stadium benefits the entire community, not just the fans. BuroHappold provided multi-disciplinary engineering services to the stadium supporting the architects Populous through the design phases and Mace during construction. In particular the synergies between the facade engineering and disciplines such as structural engineering, energy, sustainability, lighting design, acoustics, security and blast were important to ensure high performing well co-ordinated facade solutions.

The facade as part of the solution

The facade and roof of Tottenham Hotspur is a feast of materials, geometries and finishes. The architecture developed by Populous showcases a dynamic, open building skin which offers a glimpse into the buzz of activity within the stadium itself and creates an iconic building that pushes at the boundaries of what has been seen in stadium before.

Traditionally stadium facades are structurally complex – often having to span large distances between infrequent primary structural columns and slabs whilst having to accommodate significantly large movements. The Tottenham Hotspur Stadium is no different. The primary structure including pitch, stands and roof were designed well in advance of the facade due to necessary acceleration to test viability of the scheme. Consequently one of the first tasks in supporting the architects with the facade development was geometry definition and panelisation in relation to the primary structure and determining what secondary steelwork was required to adequately support the facade.

This was a large optimisation task that was particularly important in achieving some of the feature facade elements such as the 40m tall, cranked, curved south facade which consists of single glazed cold bent panels and the “twin skin” facade around the majority of the stadium which consists of an inner skin of glazed stick curtainwalling and an outer skin of 4.5m x 1.2m perforated aluminium mesh panels with a fully accessible maintenance cavity between the two skins.

The south facade particularly is a focal point for the building – being the main entrance and the start of the journey into the building. Geometrically and structurally challenging, it was also key to get the environmental approach right. The concourse behind the facade is not a fully conditioned space but clearly with a south facing glazed facade appropriate mitigation against solar gain was necessary. The glazing is comprised of single laminated heat strengthened glass. A solar absorbing interlayer is used to achieve the g-value. The facade allows passive natural ventilation through continuous strip openings integrated into the base and at the main curved fold along the elevation. Furthermore, detailed CFD assessments were carried out to determine temperature ranges within the space
and assessment of any condensation risks with using single glazing.

The stadium roof is a complex assembly comprised of a bicycle-wheel shaped cable net structure with twin tension rings on the inside connecting to the outer fabricated steel box outer compression ring with radial cables connecting the two. Radial rafters are propped from the upper radial cables to support a braced secondary structure which, in turn, supports the roof cladding which is an aluminium standing seam with polycarbonate panels at the leading edge providing necessary light translucency.

At the far edge of the roof sits a sky lounge which comprises a restaurant and bar that is accessed through radial access bridges. Inclined large format double glazed units provide an uninterrupted birds eye view of the inner stadium and pitch. The extensive movements across the roof had to be carefully accommodated within the detailing of the sky lounge cladding with bespoke movement joints developed to accommodate up to 50mm of movement between segments. Concertina type gaskets were used between segments, spaced to align with the radial roof ties. The main supporting frame for the glazing was designed to be isolated from the surrounding roof structure to allow the glass to be supported at the top and bottom with unframed vertical joints between the glass panels.

The Tottenham Experience Building sits just in front of the stadium and houses a museum depicting the history of the club, the main shop and ticketing. The building incorporates the refurbished Grade II listed Warmington House which is nestled at the centre of the building. The new building incorporates the largest cast iron facade in the UK which was developed using digital fabrication to create moulds from CNC cut foam with the traditional method of casting. The building also incorporates two incredibly impressive glass boxes. Again, linking with the idea of transparency used with the Stadium to provide a glimpse of the hive of
activity within. 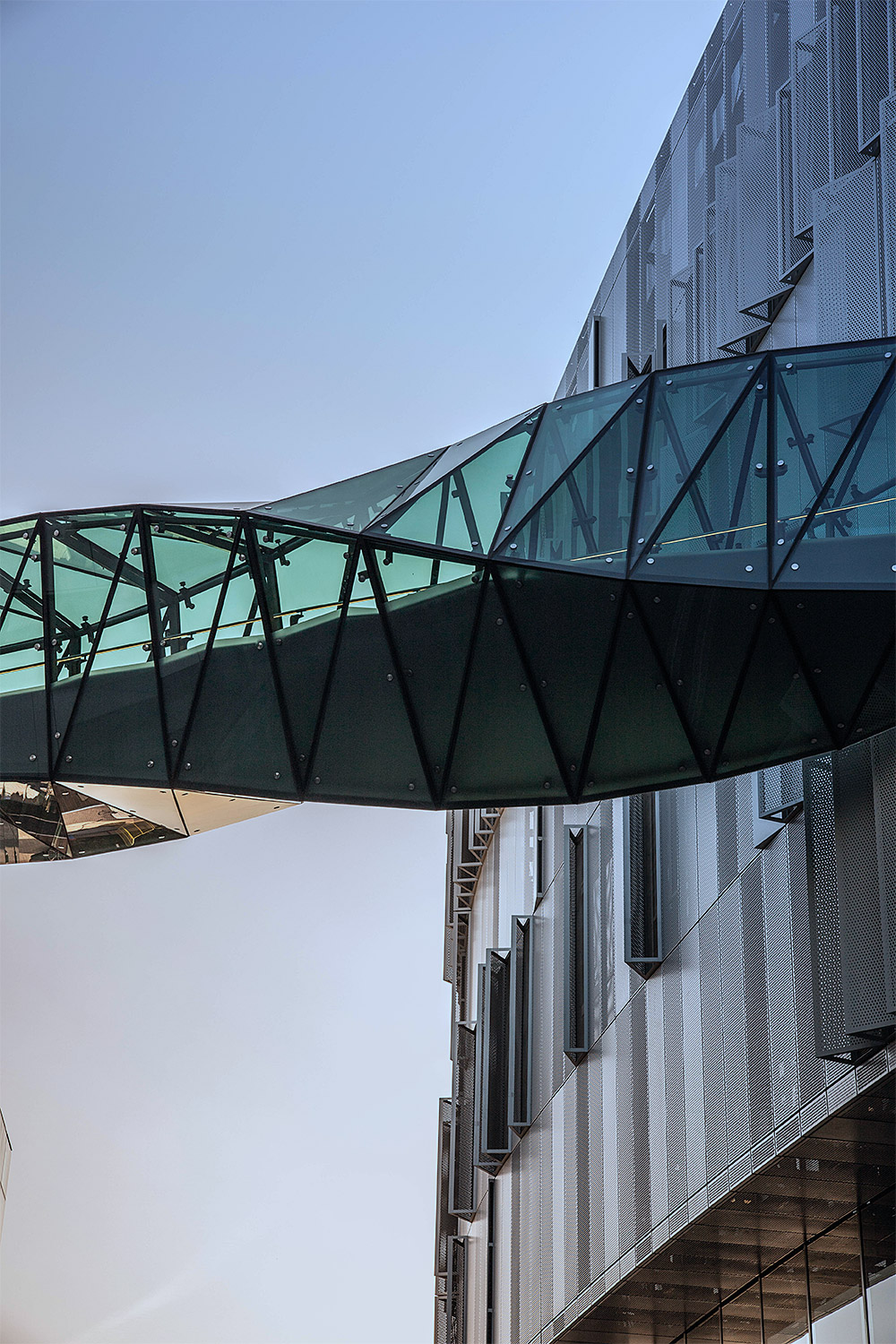 The creation of a world class venue

It is without a doubt that the facade contributes significantly to the creation of a world class venue, a new heart for Tottenham Hotspur Football Club. The clever and careful design by Populous positively engages the public and the community. Making the envelope largely transparent with incredible views inside and out thus creating a seamless connection with the surrounds. The extensive use of glass in stadia, particularly at public level is not overly common in stadium design. The facade engineering challenges presented in creating such unique geometries were coupled with much higher loading and movements than are commonly applied to glass in buildings. The careful selection of materials combined with the highly engineered interfaces and detailing are what really allow the clients hopes, the architects vision and the entire Tottenham Hotspur communities passion for the team to come to life in this new home for their club.

This article originally featured in the Autumn 2019 issue of Intelligent Glass Solutions. You can view the full publication here. 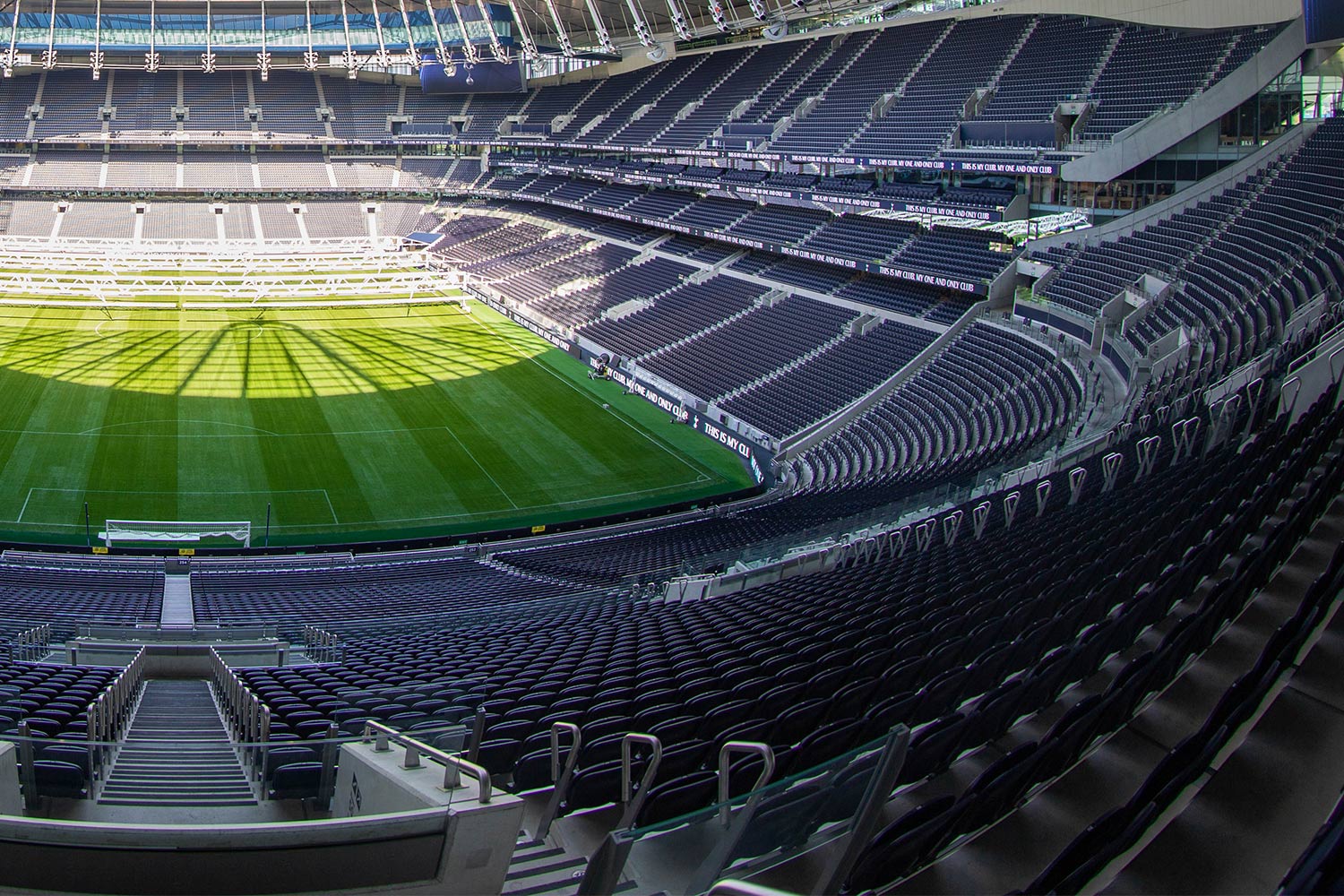 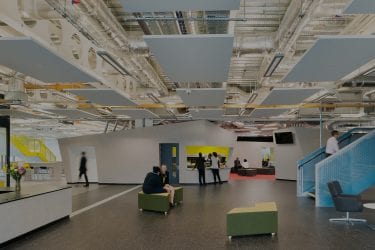 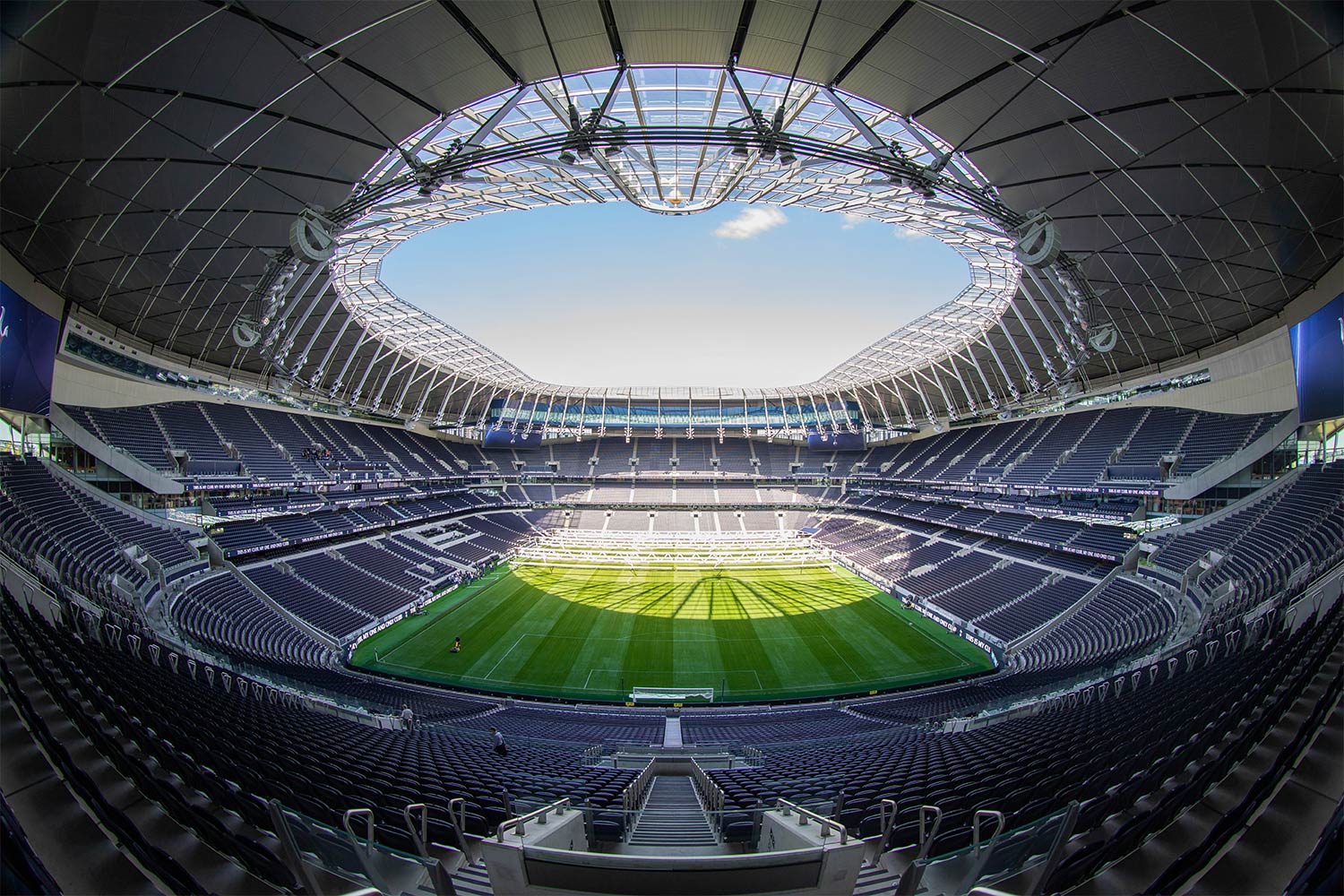 The NFL comes to Tottenham News