What is the best type of building for collaborative research?

The image we used to have of big scientific research is something that could double as the villain’s lair in a James Bond movie ­– brutal, impenetrable, and heavily gated.

Not all science was like that but a lot of it, particularly in biomedicine and pharma, certainly was.

There were secrets to protect and the animal rights crowd to keep out, whether or not animal testing was actually taking place. There was also science that was remote for other reasons—the idea that a campus setting was the best way to stimulate discovery and innovation, in a similar way to many universities.

Science and big pharma are now coming in from the cold and looking to become more open and collaborative. BuroHappold Engineering recently hosted a Higher Education Design Quality Forum  evening focussing on how different environments can promote collaborative innovation, often between universities and commercial organisations. With four big players in the sector, we heard about four very different sorts of science experience.

The first story was about Ri.Med in Palermo and was told by Alessando Padova, its CEO. Ri.Med is a collaborative work-in-progress venture between Sicily, the University of Pittsburgh and the University of Pittsburgh Medical Centre. Their planned new campus will create a global hub and centre of excellence for bio-medical research, in part to fill some of the gap left in corporate R&D capability as a result of the mergers in the science and pharma industries. The approach is about integrating different entities and areas of expertise. The facility is open, has lots of glass and is organised as a ‘village’, with small groupings forming part of a bigger whole; very different from the leviathan institutions of the last few decades . 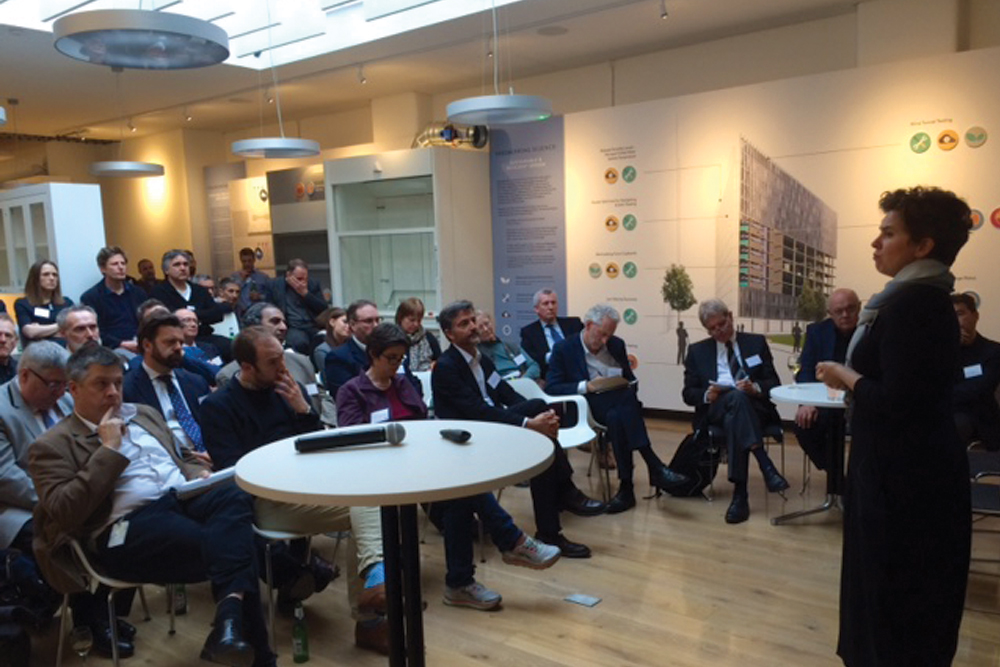 The second tale was from AstraZeneca, the massively international firm, with a presence in 100 countries and headquartered in the UK. Their HQ setting used to be in the bucolic setting of Alderley Park in Cheshire. The arrival of a new CEO who instigated a curiosity-led approach rather than a product-led one saw the firm up sticks and relocate to Cambridge, where they had previously only had a small presence, in order to promote collaboration with the massive intellectual capital available in and around the University.

The story they and Tomislav Dushanov of architects Herzog & de Meuron told was the process of building the brief to get the headquarters that they thought would crystallise the massive cultural changes they are making in how the firm goes about discovery.  It is real ‘we shape our buildings and they shape us’ stuff—open, big but on a human scale, a courtyard reference to the collegiate nature of the University of Cambridge and an honesty about materials—concrete, wood and glass, lots of glass; in fact glass and the transparency that comes with it was the leitmotif of the evening. As to whether this building works and will cement a curiosity-led approach, as with Ri.Med we will have to wait for the completion and bedding down of the building.

The Crick story, told by HoK architect David King was similar in many respects. It is a showcase British science building with University, charity and commercial partners crammed into a congested and difficult site to put London bio-med at the centre of city life, with easy access to local, regional and international collaborators. Drawing the community in and opening up part of the science engine for scrutiny is part of the brief and it looks to do this well, making this evolving quarter of London, and indeed London itself, much more interesting and relevant.

Finally, we heard from Professor Mike Curtis, one of the key driving forces behind Queen Mary University of London’s Blizard Building . In terms of where research buildings are now heading, this was something of a trailblazer. It has been in operation for over 10 years and exhibits the key principles that are being explored by Ri.Med, AstraZeneca and the Crick – a contemporary, open and transparent building located firmly in a community and seeking to use its architecture to forge links with that community and with communities beyond the immediate locale.

The Blizard is on multiple missions; world class science, being a vector for better health in the East End, lifting the science aspirations for the local school children—there was a lovely testimonial from a child who said she would not have considered Cambridge had it not been for the Blizard—and being amongst the community to conduct genomic research, particularly around knockout genes. This is a super important area for Pharma research, the condition where people have genes that are not working but with no apparent effect on the person. It happens that the Bangladeshi community that surround QMUL and the Blizard are a very rich resource for this research and that getting the information is not a quick mouth swab but an on-going process. Ground breaking research from QMUL on knockout genes was published last month in Science Magazine.

What did we learn from these fascinating case studies? The workshop was entitled ‘Cottage or Factory’ and asked the question “What is the best type of building for collaborative research?” Something big, space-age and all-encompassing or something smaller, perhaps more modest, that relies on what others are doing nearby for its connectivity.

While we did not get any real evidence as to the answer to that particular question, because either the buildings were not operational or there was no comparative context, we did get a lot of insight into the way things are headed with these four utterly fascinating buildings. Openness, whether partial, illusory, or actual is a really big deal for science. It matters for collaboration, and this is the thrust of the Ri.Med’s village, seeking in part to compensate for a loss of industrial R&D capacity brought on by mergers; it matters for AstraZeneca whose researchers need swim more in the science milieu of Cambridge; it matters for the Crick who have a showcase approach to get themselves the best scientists; and it matters for the Blizard who want to take those around them on a different journey.

With this comes exciting architecture that is not just compelling in form but also needs to celebrate what is happening inside, by lots of transparency, by intriguing lines of sight into the interior and, in the case of the Blizard, by tantalisingly placed Will Alsop pods that speak of fun stuff happening without spoiling the plot. Science has come further in from the cold with the Blizard’s next pod, this time outside of the building and, in this way, it extends the way science engages with the public. We look to see whether the idea catches on.